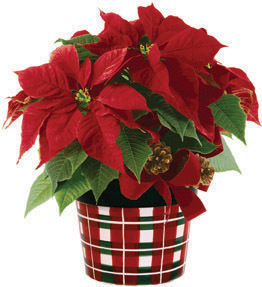 Poinsettia, the Christmas plant, is popular in many American homes. With the introduction of long-lasting cultivars, the popularity of the poinsettia has increased significantly. It was introduced to the United States in 1825 by Joel Robert Poinsett, first U. S. ambassador to Mexico who obtained plants from the wilds of southern Mexico. The common name for the exotic plant, poinsettia, came from his last name. Botanically, the plant is known as Euphorbia pulcherrima.

Examine the soil daily, and when the surface is dry to the touch, water the soil until it runs freely out the drainage hole in the container. The amount of water recommended in the table for use in various sized containers ensures that enough water will be applied so that some will run out the drainage hole. If a saucer is used, discard the water that collects in it. Do not leave the plant standing in water. Overly wet soil lacks sufficient air, which results in root injury.

A wilted plant may drop its leaves prematurely, so check the soil frequently. Plants exposed to high light and low humidity require more frequent watering. If wilting does occur, immediately water with the recommended amount, and 5 minutes later water again.
Light
If you obtain a poinsettia for your home, place it near a sunny window where it will have the most available sunlight. A window that faces south, east or west is better than one facing north. Do not let any part of the plant touch the cold windowpane because this may injure it.
Temperature

To keep the plant in bloom, maintain it at a temperature of 65 to 70 degrees F during the daylight hours and, if possible, move it to a cooler place at night. Because root rot disease is more prevalent at temperatures below 60 degrees F, do not put the poinsettia in a room colder than this. Avoid exposing the plant to hot or cold drafts, which may cause premature leaf drop.
Reflowering

Poinsettias can be reflowered the following Christmas, but unless a yearlong schedule of care is observed, the results usually are not good. For such a schedule, continue normal watering of the soil until the first of April, then allow it to dry gradually. Do not let it get so dry at any time that the stems shrivel. Following the drying period, store the plant in a cool (60 degrees F), airy location on its side or upright.

In the middle of May, cut the stems back to about 4 inches above the soil, and either replant in a pot 1 to 2 inches larger in diameter or shake old soil off the roots and repot in the same container, using a new soilless mix. Many good commercial potting mixes are available. Choose one that is not very finely textured. Using soil from the garden can introduce disease to the plant. Water the soil thoroughly after potting; wait five minutes and water again. Then put the plant near the window that is exposed to the most sunlight. Keep the plant at a temperature of 65 to 75 degrees F, and water when the surface of the soil is dry to the touch. After new growth appears, fertilize every two weeks with a complete-analysis, water soluble fertilizer at the rate recommended on the label for flowering plants.

In early June, leave the plant in the pot, move it outdoors, and place it in a lightly shaded location. Continue watering and fertilizing the plant while it is outdoors. Pinch each stem (remove 1 inch of terminal growth) in early July. Then, between August 15 and September 1, cut or pinch the new stems back, allowing three or four leaves to remain on each shoot. After this second pinch, bring the plant indoors and again place it near a window with a sunny exposure. If the plant is not pinched, it will grow too tall and be unsightly. Keep the plant at a temperature of 65 to 70 degrees F at night and continue watering and fertilizing.

Poinsettias are short-day plants, which means they flower about 10 weeks after the daylight shortens to about 12 hours or less. Therefore, to have the plant in full flower by Christmas, keep it in complete darkness between 5 p.m. and 8 a.m. from the first part of October until Thanksgiving. During this period, any kind of light exposure between 5 p.m. and 8 a.m. will delay flowering. A closet, opaque box or opaque cloth will keep the plant in darkness during those hours. Remember to put the plant near a sunny window in the daytime. Continue fertilizing the plant until mid-December.

Various reports over the years have led the general public to believe poinsettias are toxic to humans; however, this has not been authenticated. Research conducted at The Ohio State University and other institutions has proved the old wives’ tale that poinsettias are poisonous to be false.